skip to main | skip to sidebar

What is the shape of the universe? The question has tantalized humankind since civilization first gazed toward the heavens. Theories about whether space is finite or infinite, flat or curved have blazed in the firmament of scientific discourse with varying intensity over time, burning brighter or fading in the face of new data and competing ideas.

Now a new study of astronomical data only recently available hints at a possible answer: The universe is finite and bears a rough resemblance to a soccer ball or, more accurately, a dodecahedron, a 12-sided volume bounded by pentagons.

If proven by further evidence and scrutiny, the model would represent a major discovery about the nature of the cosmos.

"What makes it exciting now is it's not a matter of idle speculation," said Jeffrey Weeks, a freelance mathematician in Canton, New York, and study co-author. "There's real data to look at and the possibility of getting a definite answer."

Weeks, recipient of a MacArthur Fellowship or so-called "genius award," arrived at the model with a team of French cosmologists while studying cosmic background radiation observed by NASA's Wilkinson Microwave Anisotropy Probe (WMAP).

With a microwave antenna pointed into deep space and shielded from local interference emanating from the sun, Earth, and moon, the spacecraft has recorded the clearest soundtrack to date of the microwave radiation echo of the Big Bang, the event most scientists believe created the universe.

Like the visible light of distant stars and galaxies, cosmic background radiation allows scientists to peer into the past to the time when the universe was in its infancy. Density fluctuations in this radiation can also tell scientists much about the physical nature of space.

Combing through those observations, Weeks and his colleagues found that the most telling information supplied by WMAP was, in fact, the resounding echo of what was missing. Density fluctuations on the largest scale were far weaker than expected, a gap Weeks and colleagues say is best explained by a finite universe.

To illustrate the concept, Weeks points to the analogy of an ocean and a bathtub. While the ocean (an infinite universe) can support 40-foot-long waves, a bathtub (the finite universe) is simply too small. The bathtub cannot support waves longer than the length of the tub itself.

Moreover, observations of the cosmic background radiation enabled Weeks and his colleagues to posit possible shapes for the universe to explain its fluctuating density. The researchers could then test their models through mathematical proofs against the microwave data gathered by the WMAP satellite. Among cosmologists, three broad categories vie as the most likely shapes to fit the cosmos: flat, negatively curved (saddle-shaped), and positively curved (spherical) space.

So Weeks said he started with the simplest model of a finite space, a torus.

(To picture a torus, roll up the sides of a piece of paper to create a cylinder. Starting over, roll the paper top to bottom to create a new cylinder. Now imagine rolling both ends simultaneously, but instead of using paper—two-dimensional space—start with the rectangular space of your office or living room—three dimensional space.)

"When you actually go and do the computation and you say, what sort of microwave sky do you expect to see in a torus universe, it doesn't match very well," said Weeks.

"But the good news then is that…if you start with a dodecahedral block of space and again hook up on the sides, then it matches quite well."

In other words, taking the density fluctuations in cosmic background radiation recorded by WMAP, the math adds up if the universe is finite and shaped like a dodecahedron.

Weeks cautions that his team's model of a finite, dodecahedral-shaped universe, while promising, is hardly a proven theory. "There's more work to be done, he said. "It could be affirmed, or it could be refuted."

A description of their research appears tomorrow in the science journal Nature.

In an accompanying perspective article, George F. R. Ellis, a mathematician at the University of Cape Town, South Africa, writes that the researchers' cosmic map "accounts for the WMAP data better than do standard models," he wrote.

"Can this proposal be confirmed? Yes indeed," Ellis wrote, noting that future observations from WMAP's successor, a European satellite to be launched in 2007 even more accurate than its NASA counterpart, will provide key observations on cosmic background radiation that could confirm or disprove Weeks' theory.

Ellis concluded: "The WMAP data, as interpreted by [Weeks and colleagues], suggest that we might indeed live in such a small closed universe."

Inicio
Suscribirse a: Entradas (Atom)
“An analysis of astronomical data suggests not only that the universe is finite, but also that it has a specific, rather rigid topology (dodecahedral sphere). If confirmed, this is a major discovery about the nature of the universe.” 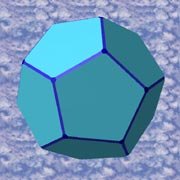 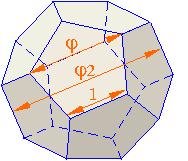